News
You are here: Home1 / News2 / Frontpage Article3 / Why Speed Gates Are So Popular? 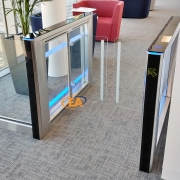 Security is vital to every business, especially for corporation buildings that are accessible to the public. However, it’s very unlikely that every company will want members of the public being able to physically enter into their facilities once they reach reception, as an example, which is why several security systems are being introduced.

Fortunately, the team at the EA Group have a great understanding of the security industry, enabling them to be able to create this guide covering why speed gates are becoming increasingly popular in recent years.

The primary reason why they are so popular is that they provide great security, but it’s important to understand how. Previously several gate options have been undependable due to the ability to tailgate each other to get through the barrier, often because they aren’t supposed to have access, to begin with.

Almost all speed stile gates are now created with highly perceptive infra-red and dual access sensors, making it near enough impossible for tailgaters to go undetected. Even if there was an attempt to try and go through one of these barriers, it’s likely that an alarm will be activated, which raise attention for a member of staff to attend to the concern.

Integrates with many third-party devices

It’s possible that before the introduction of speed gates, many businesses would have already had an entrance control system, often through the use of ID cards or badges. Fortunately, most security speed gates can integrate with many third-party devices such as these, enabling more companies to have the opportunity to install these systems with ease.

In terms of health and safety, they can also be linked with other vital third-party systems including the building’s fire system to guarantee that the gates are continuously open and operational.

As the name gives away, these security gates are known for being speedy and efficient. This is often one of the crucial aspects for particular industries that require security, such as offices or leisure facilities, where they continuously handle a substantial amount of people at a single time. With the implemented innovations, the security systems can read ID cards quickly whilst also guaranteeing that no issues occur including tailgating and long queues.

Unlike a few notable electrical security system alternatives, speed gates can also be controlled manually if required. For this, it’s likely that a control panel will be installed close to the gates so that a member of security can continuously overlook who the gates are permitting through, as well as enabling the option for manually opening and closing the gates if required.

More than one type

Every business has its unique security requirements, which is why it’s ideal most manufacturers can devise speed gate systems that are tailored for their needs. Often this revolves around how many lanes they will require, where it advised the more people you have to enter the premises, the more lanes you include. Additional variants include narrow or wide lanes, tall glass gates, and bespoke finishes.

Although the design and finish of speed gates may vary depending on the manufacturer, overall they are very aesthetically pleasing. Due to this, many companies will often consider this more than the advanced security features that special edition speed gates provider, where they will simply choose a system based on its look within the business environment.

Thinking about introducing them into your business?

For those that now have a keen interest in installing security speed gates into their business, why not confer with an expert, like the EA Group? Having been established for numerous years, we have become one of the UK’s most reputable suppliers for advanced security products and services, most notably speed gates. By calling +44 (0) 1372 459536, you will have the opportunity to speak to one of our experts who will be happy to recommend the most suitable system based on your requirements.